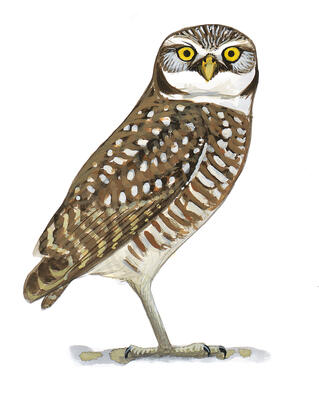 (Wren House Brewing Company's Blondie IPA is scheduled to be released on Wednesday, March 17th at noon, and will be available while supplies last!  Be sure to grab some before she dips back into her burrow!)

Being a mom is never easy, especially if you are a Burrowing Owl. A warming climate and rampant development mean that it’s getting harder and harder to find food and safe burrows even for single, unburdened owls. Enter the stress of setting up a household and you’re in for a rocky road.

“Blondie” was a biologist’s dream. Markedly lighter plumaged than typical Burrowing Owls, she set herself apart from other wild owls by color, making her easy to identify and track. Blondie hung out with a scant few other owls along a crumbling quarry pit wall at Rio Salado. The owls lived within the transitory tunnels of Rock Squirrels and apparently a few were able to pull off broods each year and keep the group going. Nearby vehicular traffic was ever present, and heavy equipment made regular appearances to Blondie’s pit. Workers avoided the owl area, but regardless of machinery, fragile walls like these regularly deteriorate.

Burrowing Owl eggs are also fragile. White and almost perfectly round, they look like ping-pong balls. Depending on a female’s condition, she can lay 8-10, but typical clutches are 2-5 eggs. Once the female is done laying, she will begin incubating the eggs—the ultimate in meditation retreats. She sits in single-minded purpose, with her mate bringing food (and hopefully providing audible encouragement) for about three weeks. Fortunately he will give her daily breaks so she can stretch her wings, see some sights, hunt on her own, and not lose her mind. Both parents actively feed the young, but the kids are burrow-bound for about 1 month. They may teeter tentatively to the burrow entrance to look for mom/dad, but they are fluff-balls, unready for the world. Baby Burrowing Owls are gangly and gorgeous at 2 months of age, because they are mostly feathered but still sport a baby’s downy chest and un-mottled coloration. Raising this many helpless young is no small feat, despite both parents being committed and diligent, in part due to our shifting climate. Burrowing Owls eat insects and rodents, and both evolved to rely on native plants having a more-or-less predicable schedule. Hotter summers and violent, infrequent storms aren’t just annoyances for people. It is a catastrophic recipe for birds.

Burrowing Owls aren’t the only ones struggling with climate change. Audubon’s ground-breaking report Survival by Degrees synthesizes robust data to predict significant declines in 389 North American bird species as the planet warms. The report provides a “Climate Visualizer” tool through which readers can search by bird species or state to see scenarios based on the rate of temperature increase. The hopeful message of the report is that if we are able to hold warming to 1.5 C, 76 % of the at-risk species will be significantly better off than if temperatures rise 2 or 3 C. This urgent call to action means it’s time to get busy, and the Climate Action Guide describes how to help, for the sake of both today’s and tomorrow’s baby birds.

We never saw owlets at Blondie’s pit. We saw adults like Blondie, loyally hanging on to their piece of parched clay, but no hopeful puffs awaiting their chance. What we did see was Blondie visiting the artificial burrows we installed just across the Salt River from her pit. Over the years, we’ve observed many wild owls jumping from their sinking (or crumbling) ships and joining the ranks of relocated owls, successfully mating, and enriching the gene pool. The activity of building artificial owl burrows and hoping birds find them is called “passive relocation” and is used frequently in other states. Here in AZ, we are actively removing owls from dangerous sites and moving them to new areas, some of which are adjacent to other owl colonies. It is a win for us to see wild owls like Blondie make the shift to our burrows, and we like to think she found a very special mate, one that is as unique as she is.

Celebrate Blondie, and Burrowing Owls like her, by raising a toast of Wren House’s “Blondie IPA” and by signing up to help Audubon’s Burrowing Owl project. This special release brew is the second in a series created to raise community awareness of Burrowing Owls and their plight, and to provide a way for people to help. Audubon’s partnerships with Wild at Heart, the Arizona Game and Fish Department, and many local companies enabled the rehoming of hundreds of Burrowing Owls to date. Volunteer work events are tentatively scheduled for fall 2021 so sign up for updates.