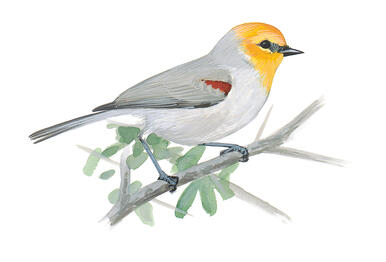 Record Your Sightings in eBird

Every time you spot a bird, you can contribute to something bigger– by recording your sighting in eBird, a major online database that has been tracking birds for many years. Our featured bird, the Verdin—Pájaro Moscón Baloncito in Spanish—is a small bird found in the southwest deserts. While related to titmouse and chickadee species, the Verdin is the only North American member of the old world family of birds known as penduline tits. Their Latin name, Auriparus flaviceps, means “yellow-headed golden chickadee."
This petite gray bird is easy to miss as it flits acrobatically among the branches of desert trees. For such a small bird (4 ½ inches long), the Verdin has a very loud call. Juveniles have no distinctive markings; however, the adults have a bright yellow face and russet shoulder patches. Verdin do not migrate and live in one place for their lifetime. They are resident birds in the deserts of Arizona, California, southern Nevada, New Mexico, and Texas, and also live in the deserts of northern Mexico.
What is often noticed are the round woven nests made of spider webs and twigs. A Verdin pair builds multiple nests that function as snug homes protecting the birds from cold and extreme heat. The female choses a larger nest for laying the eggs and raising young. The entry to that nest is on the bottom, a strategy to discourage predators from entering. The breeding nest has a lining of feathers, leaves, and other plant materials bound with spider silk. The female will usually lay four blue-green to whitish color eggs. About a month after hatching, the young fledge from the nest and the parents feed them for another three weeks or so.
Nests built in summer often have an opening that faces prevailing winds, perhaps helping in cooling the interior. One study documented a Verdin pair had built 11 nests in one season. Perhaps Verdin beat us to the idea of a Man Cave and a She Shack.
When I first moved to Phoenix, Arizona the landscaping at my home was all non-native trees. I never saw a Verdin. I so love this petite desert charmer that I planted a blue palo verde tree, a tree I knew Verdin preferred. The tree grew quickly and I was delighted to see a Verdin pair check it out and in a few days, they were building a nest.
My resident Verdin pair are vocal and building their new nest this February. Desert birds are smart, and nest early before the searing desert heat of summer. Another adaptation of desert dwelling birds is to nest again in the late summer if it rains, so do not be surprised if a wet summer results in another brood of young Verdin and other desert birds.
My motto is: “Plant a native desert tree and have a Verdin in your yard!”
As the cities of the desert southwest encourage water conservation by planting native trees, the Verdin is becoming a bird of our desert cities. Once considered to be a species in steep decline, the prognosis is now good for the tiny Verdin as population trends are increasing. I like to think Audubon's Plants for Birds campaign is contributing to this increase.