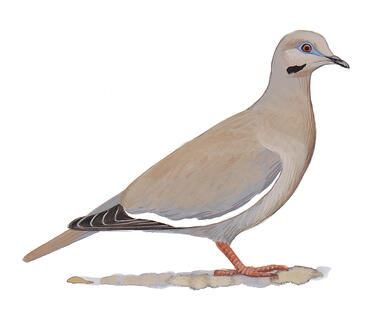 White-winged Dove within the United States enjoy a stronghold in the desert Southwest of Arizona, southern California, New Mexico, and Texas. As with many migratory birds, there are scattered records of individual White-winged Dove across the United States and southern Canada to the delight of those who like to spot rare birds where they live. In addition to the desert Southwest, non-migratory populations can be found in Florida, Mexico, Central America, and Cuba. The populations in the desert southwest and into northern Mexico are the mearnsi subspecies. The doves in Southwest U.S. and Mexico nest in a variety of desert and riparian (streamside) habitats where they take advantage of orchards for nesting and grain fields for a food source.

I personally love the doves that are denizens of the Sonoran desert, where they have a symbiotic relationship with Saguaro cactus. Gathering of fruit from the Saguaro is an ancient tradition of the Tohono O’odham Tribe and they clearly recognized the relationship of the White-winged Dove arrival with the phenology of the Saguaro cactus.“Haashan bahijik jek kaij” said by elders when singing doves were heard in the morning roughly translates to “their singing the Saguaro fruit is ripening”.

Living in the desert has refined my senses to the changing seasons. I particularly look towards the desert spring, harbinger of the blistering hot summer to come. Although winter in the desert is glorious, I miss the flights of white-winged doves overhead that remain in my mind’s eye on my winter desert walks. My anticipation of their return from Mexico and Central America begins with the March appearance of wildflowers, a riotous event of colors if we have good fall and winter rains.

The first White-winged Dove arrive in Arizona in late March, by mid-April the early morning skies are filled with flights of birds and the distinctive “hooo-hooo-ho-hooo” or “who-cooks-for-you” call can be heard in the desert and in urban neighborhoods. The Sonoran desert is bright yellow with blooming palo verde, mesquite trees, and desert brittlebush. In May, the yellow is fading, replaced by the indigo blush of ironwood tree flowers accented by White-winged Doves perched among the white flowers crowning majestic saguaros. All the intensity of 100 degree plus days and the bright red saguaro fruit replaces the delicate white flowers in June. White-winged Dove descend upon the fruits, plunging their heads into the tasty morsels, now covered in the red stain from the fruit. The monsoon summer rains arrive in July and August, greening the desert with food resources for newly fledged doves.

The doves leave the desert before cooler weather arrives. I notice the change in the desert bird community; it seems so quiet. I am bemused that almost all the White-winged Dove have departed Arizona by September 1st, the opening day of dove hunting season! Smart birds.